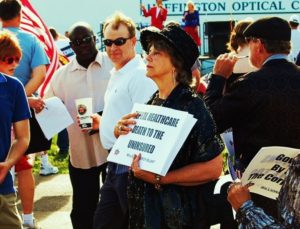 It was only a few days ago that conservative activists’ Facebook pages were “a-twitter” with news that a website named CrashTheTeaParty.org had been formed, which described themselves as, “a nationwide network of Democrats, Republicans, and Independents who are all sick and tired of that loose affiliation of racists, homophobes, and morons; who constitute the fake grass-roots movement which calls itself ‘The Tea Party.”

They went on to explain their ultimate goal: “to dismantle and demolish the Tea Party by any non-violent means necessary.” To do this, they planned to operate within the Tea Party itself by infiltrating the movement. Their website described their plan of attack: “Whenever possible, we will act on behalf of the Tea Party in ways which exaggerate their least appealing qualities (misspelled protest signs, wild claims in TV interviews, etc.) to further distance them from mainstream America and damage the public’s opinion of them. We will also use the inside information that we have gained in order to disrupt and derail their plans.”

Within hours of discovering the site, conservative activists began working together as busily as a colony of bees, tracing the site back to an actual human being. Facebookand Twitter were both a buzz, first with the name of the web host, and later, the name of the owner of the domain name. He was identified as Jason Levin, a middle school teacher in Beaverton, Oregon. Levin’s telephone number, home address, and Google Map satellite images of the top of his roof were all over the web, and had it been available, a street view with a zoom into his living room window would have been included.

Security plans for the [then] upcoming 2010 Tax Day Tea Parties were quickly being laid. On April 13th, the Tea Party Patriots website emailed all their members, advising them how to handle infiltrator situations that might happen at the next few days’ tea parties.

” …Prepare your security teams and any police officers at your event… handle any incident in a calm and reasonable manner… No aggressive confrontation… be polite, and ask them to leave… Take videos that we can use to expose theimpostors… Parnter up… have at least one person with you for a witness… Make signs that say INFILTRATOR with a big arrow on it so that you can stand next to infiltrators and point at them with a cheerful demeanor….”

During the next couple of days Tea Partiers flooded the website, joining and posting tens of thousands of threads on the site’s forum. Initially, this attack overloaded their servers and locked up the site.

On April 14th, Portland, Oregon’s KPTV Fox 12 reported that Jason Levin, a Beaverton middle school teacher, was being investigated for misconduct and breaking district and state rules in his effort to dismantle a political movement.

A parent of a Conestoga Middle School student who didn’t want his identity revealed said Levin’s behavior [was] unacceptable. “Everyone has their private life and the right to do these kinds of things, but I do find it kind of disturbing that a teacher is using these hate-mongering kind of tactics to denigrate a group of millions.” he said.

On Tax Day, April 15th, 2010, the website’s features were unavailable with the exception of a page selling t-shirts for the cause.

KPTV Fox 12 reported that afternoon that Beavertonschools spokeswoman Maureen Wheeler confirmed that Levin had been placed on leave while the district investigates whether he broke district or state rules.

Russ J. Alan’s politically conservative articles have appeared on several websites such as USDailyReview.com, USAToday.com, WSJ.com ( Wall Street Journal online) USNews.com, NPR.org and RenewAmerica.com. Russ served in the former Strategic Air Command (1978-1980) and United States Air Forces in Europe (1980-1982) during the Cold War under Jimmy Carter and President Reagan (1980-1982). He served at Royal Air Force Upper Heyford, England, the air base from which the 1986 F-111 bombings of Moammar Gaddafi in Libya were launched, also one of the NATO bases closed later by Bill Clinton. After working in mechanical engineering (1983-1992), Russ was involved in business development, marketing, and the financial sector (1992-2001). He then worked in commercial construction (2001-2006). Currently Russ is an adventurist and a columnist who writes political, economics and business articles. Russ enjoys playing his baby grand piano, the guitar, mandolin, blues harmonica and other instruments. He enjoys cooking, home beer brewing and gardening. Visit Russ’s website at RussJAlan.com. You can e-mail him at Russ@RussJAlan.com or on Russ J. Alan’s facebook page.